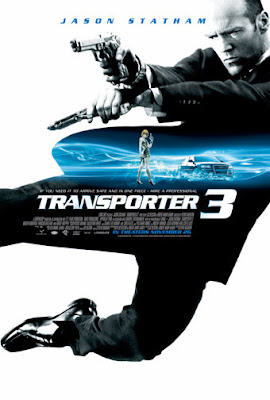 Suddenly, after watched Lock, Stock, and Two Smoking Barrels, it was "love" at the first sight. Fall in love to him even more after watched Transporter 1 & 2, Crank, War/Rogue Assassin, The Bank Job, Italian Job, Snatch.
His masculine face, his accent, his voice, his credibility to fight (damn it!), his muscle, his 6-packs-abs, his everything! He should be the next Bond.

Anyway here's my review. Saw it on its premiere last Saturday night.
After my crabbing that Quantum of Solace didn't give me the James Bond rush I expected from the series, I happily saw Transporter 3 with Jason Statham's taciturn, scowling super Fed-Ex-like operative, Frank Martin.
Jason Statham is perfect as Frank- I doubt there is anyone doing this kind of role better at the moment.
I enjoyed this film way more than the latest Bond! This installment exists as nothing more than a Jason Statham fetish movie. We see him kicking ass shirtless while the female in peril this time around ogles him. She later makes him perform a striptease much to her delight and -- let's be honest -- the audience's. You don't have to be female or gay to admit that Statham is a fine specimen of a man; I bet that most guys would kill to look like him. LOL!

And the story goes..

This time around, Martin has been kidnapped and forced into his new job bythe villain known only as 'Johnson.' Johnson has slapped a chemical-bomb-bracelet onto Martin which will explode if he strays from his car by more than 75-feet- an insurance policy to make sure he completes his task- transporting a sexy young woman named Valentina and two mysterious bags throughout parts of Europe, for reasons unknown. There is a plot involving Valentina being kidnapped, and being used by Johnson to blackmail her powerful father, but it isn't very important to the overall story, it is just there to justify the action.

And action is something this movie doesn't skimp out on. While not as show-offish as the previous film, which had action in every-other-scene, this entry in the series definitely has its share of fist-fights and car-chases, explosions and gun-battles.

What more can I say? LOVED it and highly RECOMMENDED!
Ladies, enjoy the "delight" LOL. (9/10)

Fact #1 : Jason Statham did all his stunts!
Fact #2: He was a diving athletes! (Ranked #12 in world championship!)
Fact #3: He's sexiest man alive! Excuse me... Brad who? Beckham who? And especially to Daniel Craig, MOVE OVER!!
Fact #4: Jason is thirty-six!! OMG. I wonder how he looked on her 20s.
Fact #5: Even my boyfriend jealous on him! LOL