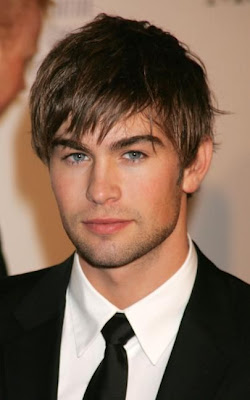 New York (ANI): Gossip Girl star Chace Crawford seems to have a new gal pal. And, according to the sources, its Sports Illustrated swimsuit model Esti Ginzburg. The 19-year-old model was seen constantly texting Crawford at dinner party thrown by fashion label Sergio Rossi and later left the party to go meet up with him, reports the New York Post. 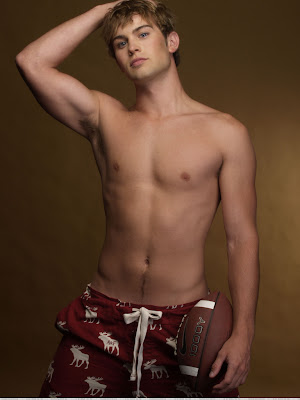 Ginzburg is slated to star with Crawford in 'Twelve', a Joel Schumacher's adaptation of Nick McDonell's book about drug-addled NYC prep schoolers. Meanwhile, Crawford would be replacing Zac Efron in the remake of 'Footloose'. 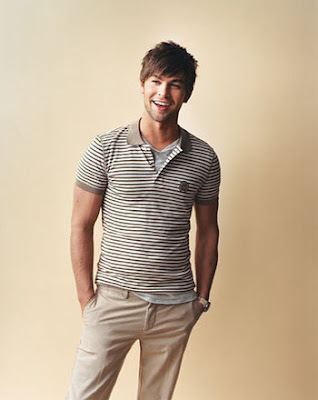 The 23-year-old actor was roped in after the 'High School Musical' star stepped out of the movie.

Where have I been?

Oh dear!!! I must be forget bout you, haven't write since.. I don't even know when.

I'm stuck in my bed now, having a heavy headache. Maybe this is the right time to start blogging again.

Well, as usual, there were soooo many stories left behind that I hadn't wrote, such as my grad. Did I already write it? I guess it's a no.

Hmm finally on early May, became one of the most important day of my life: my graduation. Happiest moment at college. LOL, I'm a bachelor now! Yayy... I'll post my photos soon, :)

I didn't work these past 3 days, I just don't know where the virus came from, what I remember was, on thursday I woke up and suddenly I feel this kind of "big rocks" in my head. Like my head beaten by a big rocks thousand times.

And I got fever, maybe it was 39.5C! Uh oh, what happen with me? Then the thing I knew, I got rushed to the doctor with my Pops.

The doctor said that I was attacked by an unknown virus. He couldn't tell me what exactly it was because I haven't done any tests. You know, I feel kinda worry, since there are so many viruses now, that swine flu, blah blah blah.

But thank God I'm still here, and feeling better, after having a bed rest for almost 4 days. I don't go anywhere, just in MY BED. 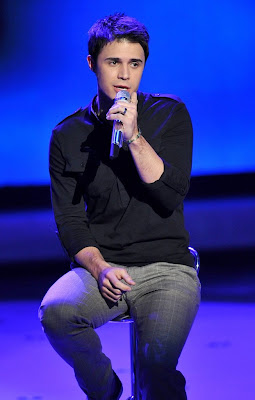 Allen wins 'American Idol' season-eight crown to the surprise of many, including himself.

Call him the "dark horse," the "Come-from-Behind Kid," the humble crooner. Call him whatever you like. But from now on you also need to call Kris Allen your "American Idol."

After a historic tally of nearly 100 million votes, the shy 23-year-old singer from Conway, Arkansas, pulled off one of the most surprising wins in the show's nearly decade-long history by taking the crown from the theatrical season-long front-runner, Adam Lambert.

Following nearly two hours of build up, when the time came for host Ryan Seacrest to announce the results, Allen and Lambert stood arm-in-arm, their friendship looking much more like a real bond than a made-for-TV facade. And when Seacrest opened the envelope, Allen looked genuinely stunned, his mouth hanging open as Lambert gave him a big hug.

Finally raising his hand in victory and looking like he was a bit nauseous, Allen said, "Are you freakin' serious? ... It feels good man, but Adam deserves this. I don't even know what to feel right now. This is crazy. Thank you so much."

Moments before, admitting that he doesn't usually mean it, judge Simon Cowell told the finalists, "I thought you were both brilliant, unusually, incredibly nice people and I think both of you should be incredibly proud of what you achieved last night." It was a distinct turnaround for the always acerbic Cowell, who repeatedly talked down to Allen during the course of the final rounds, telling him he would never win the crown, until recently changing his tune when Allen's momentum began to pick up thanks to a series of wily creative decisions.

Allen became the first "Idol" winner to ever get an official trophy, in the shape of an old-fashioned microphone, which he held by his side when his rival came back out to give him another hug as Allen continued to shake his head in disbelief. After struggling with the Kara DioGuardi co-written winner's song "No Boundaries" on Tuesday night, a much looser-looking Allen knocked it out of the park on his second try, embracing the judges and his fellow contestants as a rain of confetti and sparks enveloped the stage and it began to sink in that his unlikely ride to victory was complete. 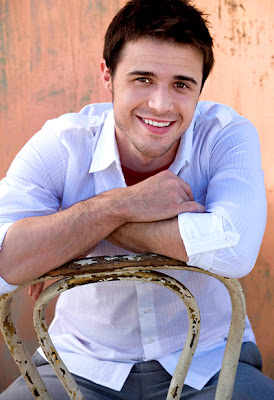 According to Seacrest, despite some busy signals, just under 100 million votes came in for Lambert and Allen Tuesday night, and though he didn't reveal how many votes ultimately separated them, he said the season total was a record-setting 624 million votes.

Eschewing their typical casual wear, prior to the big reveal, the judges put on their Wednesday best, with Randy Jackson rocking a tuxedo, DioGuardi modeling a sleek black dress, Paula Abdul sporting a body-hugging gold number and even Cowell leaving the v-neck T-shirts in the closet in place of a black suit and white shirt.

Our first glimpse of the night of the finalists found them wearing matching all-white outfits, looking like a pair of space-age cabana boys. Picking up on that crisp look, the music kicked off with the top 13, also in all white, doing a cover of Pink's "So What." Later in the program, the girls got on their glam outfits for a slowed-down take on Fergie's "Glamorous," which segued into the Fergilicious one herself doing a snippet of "Big Girls Don't Cry." She was joined by her Black Eyed Peas mates and some black-and-white-spandex clad dancers for the group's speaker-banging hit "Boom Boom Pow." 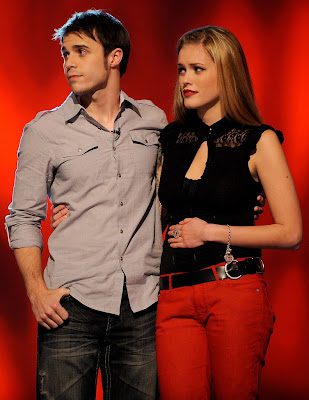 Last year's winner, former bartender David Cook, came back for a second time this season to show the kids how it's done, singing his lighter-flicking ballad "Permanent" as a tribute to his recently deceased older brother, Adam. And Lil Rounds redeemed her unglamorous exit by standing toe-to-toe with Queen Latifah and regally rocking it on the regal one's new disco-tastic single, "Cue the Rain."

Finalists Anoop Desai and Alexis Grace bopped along with Jason Mraz to his reggae lite hit "I'm Yours," last girl standing Allison Iraheta partnered with a dulcimer-strumming Cyndi Lauper for "Time After Time" and third-place finisher Danny Gokey gave a glimpse of his potential career with a soulful run through Lionel Richie's "Hello," which paved the way for a duet with the R&B legend on his new single, the slinky "Just Go." Also paying a visit on the classics-heavy finale was legendary guitarist Carlos Santana, who ripped into "Black Magic Woman," with a vocal assist from the always-fedora'd Matt Giraud, soon joined by the rest of the top 13 for a sing-along to the Grammy-winning smash "Smooth."

And the hits kept coming, as the top two got their chance to shine, with Allen showing off his country-pop potential alongside Keith Urban on the twangy "Kiss a Girl," while Lambert donned studded metallic wings, gigantic platform boots and a space-age black leather suit to croon the classic Kiss ballad "Beth." The pyro-loving rockers then descended from the ceiling in fireball slash to sing a medley of "Detroit Rock City" and "Rock and Roll All Nite," with Lambert nearly showing up both of the band's singers with his power-rock vocals.

Near the end of the two-hour flashback fantasy ride, the pair took center stage along with Queen guitarist Brian May and drummer Roger Taylor for a fog-enshrouded sway through the English glam rocker's iconic "We Are the Champions," grabbing hands for a bro-shake at one point and ending the song by holding a dual high note.

One of the night's strangest visitors was comedic legend Steve Martin, who plucked his banjo on the original bluegrass tune "Pretty Flowers" from his just-released debut musical effort, The Crow, voiced by Michael Sarver and Megan Joy. Continuing the Boomer-friendly cavalcade of oldies, the male finalists put on their best "Reservoir Dogs" black suit and ties to sing Rod Stewart's "Do Ya Think I'm Sexy?," paving the way for Rod the Mod himself to croak his classic, "Maggie May." 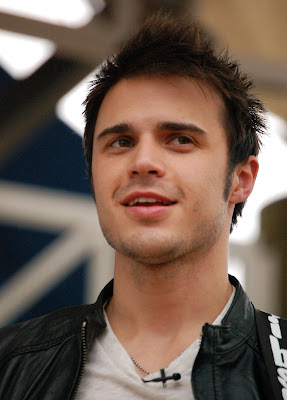 Among the other time-fillers of the night were the lampoony Golden Idol Awards, which reminded us of all the vocally impaired goofballs who didn't make it past the initial rounds, including one of our favorites, Nick "Normund Gentle" Mitchell. Despite seemingly using up his 15-minutes-plus, Mitchell acted like he was getting a real award, only to strip down to a spangly uniform and give us one more dose of his spazz-tastic rhythm and farce. We also got another glimpse of Katrina "Bikini Girl" Darrell, who got showed up by her tormentor, DioGuardi, when the judge outsang and outfoxed the swimsuit model by revealing her equally rockin' bikini body.

But, ultimately, the night belonged to Allen, who truly underwent a transformation on the show, from the meek guy who auditioned and said he wasn't sure he was the next "American Idol," to the singer who silenced the doubters not with a Lambert-like rebel yell, but with a quiet confidence and a shy grin.