if the house always wins, why gamble? 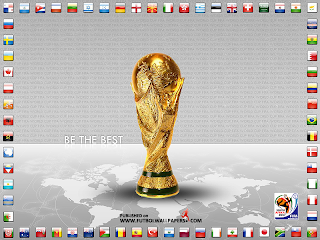 As we all aware of, every single person I know are busy talking about the 2010 FIFA WORLD CUP. After a huge ceremony last week at South Africa, men in our houses were suddenly disappeared. Either for watch the ball game with their friends or spend the night at the coffee shop, or even just watch at home, they were disappeared. Both physically & mentally. Yes ladies, for one wholly month.
I don't know what's wrong with their anxious & curiosity to watch it. But it seems, some of them (or all of them?) are taking too seriously about this issue. Because some of them (or all them?) are gambling!
Gamble also known as:
–verb (used without object)
1.
to play at any game of chance for money or other stakes.
2.
to stake or risk money, or anything of value, on the outcomeof something involving chance: to gamble on a toss of thedice.
–verb (used with object)
3.
to lose or squander by betting (usually fol. by away ): Hegambled all his hard-earned money away in one night.
4.
to wager or risk (money or something else of value): togamble one's freedom.
5.
to take a chance on; venture; risk: I'm gambling that ournew store will be a success.
–noun
6.
any matter or thing involving risk or hazardous uncertainty.
7.
a venture in a game of chance for stakes, esp. for highstakes.
Whether known as a verb (with or without object) and noun, gamble has one root: take a risk on, take a chance on money (or something else of value). It's a pity about what happens in a gamble world nowadays. Exactly 4 years ago, my brother's friend lost his HOUSE. In a morning there's a man who kick him along with his wife & son out of the house forcibly, and they became homeless overnight. My dad's friend even crazier, he could spend 3 nights in a row at the casino SLEEPLESS. When I asked, "Did he win?", Dad replied, "He won 100mill n lost 200mill". Okay that's way too extreme, several friends at high school arrested because they allegedly playing poker (gambling) at school. They stayed in jail for one night.
"If you don't gamble then you're not a risk taker". Well, I'm sure that statement came from a gambler himself.
Since when gambling become a measurement of our bravery? If I don't gamble, then what? I'm an idiot with no courage? Think again, buddy.
When you win, you'll consider hard work as a joke, cos you get the money easily. Money comes easily, so it goes easily too. What does it make you? Does it make you proud?
One of my friend said that gambling is like "rolling a snow ball". From one penny to a grand, from one grand to a million, from one million to a billion. Honey it's addictive. Win or lose, we keep wanting for more. Ding dong, the house always wins.
Please girlfriends, tell your loved ones or even yourself (cos there some of my girlfriends gamble too), that gamble is a very bad habit. So please, kick it before it dies hard.
Or is it just for fun once in every 4 years? Let's spend the money for a better cause, or even buy yourself a new shoes :)
P.S: thanks God my boyfriend don't gamble, let alone watch the game. I love him that way. I really do.