The girls are back 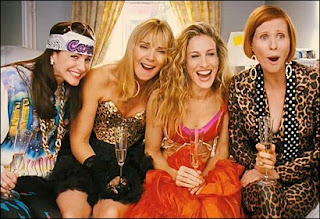 charlotte, samantha, carrie, miranda
I was so thrilled when I read somewhere last year, that Michael Patrick King will make another sequel of Sex and The City movie.
I hooked up with SATC (the series) years ago, but then, I was too young to know about what they discussed so I watched it every once in a while.
And when HBO started to broadcast it again last year, when I "old" enough to know their issues, I was totally hooked up. The stories are original, beyond expectation. The 4 characters from the story are Carrie Bradshaw (played by Sarah Jessica Parker), Charlotte York (Kristin Davis), Samantha Jones (Kim Catrall), and Miranda Hobbes (Cynthia Nixon). Although it seems my character look a lot like Charlotte, but I'm a huge fan of Carrie. She's a writer of "sex & the city" column at NY newspaper, and she journeys with her 3 BFF to find true love and how they struggle in a relationship & life. Even The Guardian named Bradshaw as an icon of the decade, stating that she did as much to shift the culture around certain women's issues as real-life female groundbreakers.
The only similarity between Bradshaw & me is, we both crazy about shoes. There's 1 episode where she broke and realize that she spent a whooping $40000 for shoes & she has nowhere to live. That's just hilarious.
I bought the complete 6 seasons and watch it almost every night before bed. I just LOVED it so much. I love how the girls find their way to solve their problems, I love that 4 of them have different characters so they complete each other, their friendship, I always want to have friendship like the SATC girls... and not forget to mention, I love the fashion!! Especially Carrie, who combines high end designer collection with something vintage & stuff from the flea market. On the third season (if I'm not mistaken), Carrie wear this huge flower thing on her clothes & suddenly it become a fashion trend! 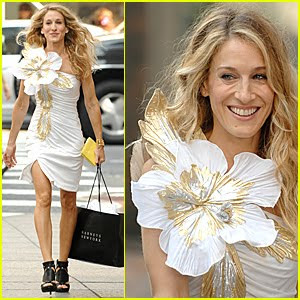 carrie wear floral dress in SATC movie
Anyhow, last night I finally watched the sequel. It was below expectation to be honest.. But it still OK. It receives pretty bad reviews, yes, if we're looking from public eyes, the movie is a bit disappointing. But no, if we're looking from women's eyes, especially for those who have marriage issues, i.e. motherhood, etc.
I love the fashion, they're fabulous, but it's just too much. Although somehow I hope SATC franchise will make another movies like "James Bond", but for fashion :)
The girls' originality characters from the series immediately gone. They've grown older, but not wiser. But I still love them anyway... And it made us laugh, even there's some inappropriate joke like Samantha said, "Lawrence of my labia". It still funny.
BTW, I just watched 1 of the episode from season 4, ahhh... how I wish they come back to be like that. But then again, it was only a movie. And SJP said, "Carrie Bradshaw is really the opposite of me, otherwise I'd be boring". Yes she is totally different person. She better be.
SATC Rocksssss! xx
PS: Have you seen the movie? Please tell me what you think! :) 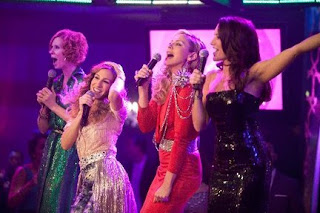 the girls in SATC2