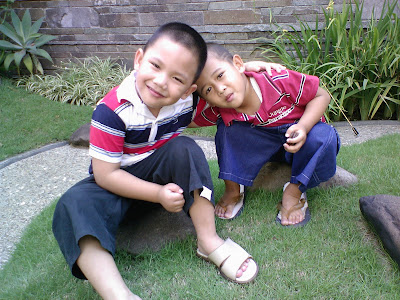 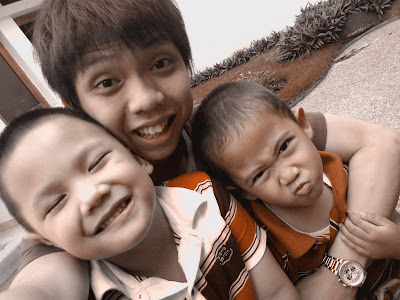 
Last night I dreamt about Billie [picture on the right]. And it was a nightmare, really :(

So Billie came to me, hugged me tightly, and he said that he was sick. He was keep crying on my lap.. Then I woke up, in tears :(

Have I told you about him? About one year ago, my Mom adopted him. Actually he's one of our family relative. But unfortunately, he came from a broken-home family. His parent got divorced, [and I don't understand why], no one really care of him, [he was around 3.5 y.o], his Mom runaway to Jakarta, while his Dad built a new family with his new wife! What a bastard!

So my Mom decided to brought him to our house and stay with us AND without permission from another family member. Our reactian was like, "wtf?". Cos Billie is a very rebellious kid [no wonder, considering where he came from!], he's wild, and yeah, he's annoying. I didn't treat him right at that time. So did my Sister and my older Brother. I really really love KIDS! But Billie... I don't know why I couldn't love him..
Only my Mom, Dad, and my boyfriend who took care of him.
But starngely, slowly but sure, he took our heart away.. Although he's very naughty, but I could see in his eyes, that he wanted to be showered by care from a family that he never has :(
Contrary to my lil brother, everyone love him, everyone care of him, everyone praise him. Billie doesn't get it. He could go to sleep without drink his milk, he could walk to his school alone. That was so sad if I remember those moment. He's just not as lucky as my little brother.
Months after he arrived in our house, I finally changed my bad behaviour to him, [actually not that bad, my sister was worse]. My boyfriend said, "You hate his parent doesn't mean you hate him too. He's just a victim. We can't blame him."
After he said that, my whole world was like, fallout. I realized that I was wrong, totally wrong. My boyfriend was right. Billie is just a bad victim from his irresponsible parent.
I started to love him dearly, I ask him to play with me, we're eating together, watching TV together, even I cleaned up his ass. I can't believe if I open my heart, then everything becomes clear. I understand where Billie's bad act came from.
Then his Daddy took him away from us, maybe he realized his mistake. [But I don't believe him!! How could you trust a man whom left his family for a new wife? Yuckkkkk]
But what can we do? Cos he's Billie's biological father.
So my Mom given Billie to his Dad.
Everynight on my prayer, I always hope that his Dad treat him right. And I was shocked with my dream last night, I hope he's fine. Please God promise me that he's fine.. :(
Bye Billie... You'll always in our heart