I wish I could write more.. But my lame internet connection wouldn't let me. So sometimes I just keep my  thoughts written on twitter or in my blackberry's notepad that obviously didn't end up anywhere. That's sucks. And my best ideas often come up when I showered (don't ask why). Good news is I shower twice a day, and bad news is I'm a totally forgetful person. Ideas come and eventually go away. Such a shame. 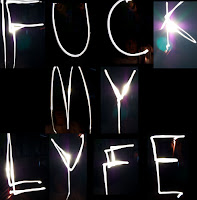 Today is January 14th, we're about to enter the third week of 2011! Doesn't time fly so fast? And what have I done most of the time? Whining over the same old shit that happened over and over again in my family. I never thought that the new beginning turned out to bring a lot of sadness and negativity. No I didn't cry. My tears dried on their own. Maybe my eyes tired of crying over the same thing. Maybe there's a certain amount of tears for every section in my life, and for this "family" section, my tears have dried.
Fighting parent is the least thing you want to see whenever you get home. Especially after a long hard day at work, complete with its dozen of problematics issues and many other problems. What did they fight for? Basically nothing. My childish, easy offended, emotional, and jobless Mom could magnify one simple thing into one big issue that caused a scene. Meanwhile, my stolid, introvert, and sensitive Dad could just sit in silence, puff his cig. He smiled at me, even his heart cried.
It's a common thing when you fight everyday with your boyfriend at highschool. But when you're 40 or 50 something parent (and grandparent!) of hopeless children, is it inappropriate? Moreover if you're fighting over the same problem. It seems idiotic. Let's say, if you both not really fell in love with each other, why decided to get married? To ruin our teenage dreams? My brother is still SEVEN for fuck's sake!
Every normal person wants marriage that last forever. We have to be really careful cos when two become one, there are literally two heads in one roof. We have to let go our ego and accept the fact that nobody is perfect. Could we?
One day, there come a day that will change our life forever. Become a parent. And I've made a promise. If  someday God let me be a mother, I'll do my best. Maybe I won't be the best mother, but at least I'm willing to be.

For now, please just let us through this. I surrender to You..