If I can choose one of the bravest man on earth TV, he must be BEAR GRYLLS.
For those of you who love spending time doing nothing but watch TV, please do watch Bear Grylls' Man VS Wild/Born Survivor. Forget crocodiles, sharks, or insects that make you bleed through your ass. Bear Grylls is the scariest thing on TV. And last night, it was his 25 best episodes. Which were crazy, sick, and eventually became my new version of Man VS Vomiting . LOL.

The premise for the programme is quite ridiculous. Basically, every week Grylls is dumped in an extreme location somewhere around the world and armed with ONLY his wits and whatever food he can lay his hands on has to make it back to civilization.
Something like, what if you trapped in a desert and run out of water? Bear said you could drink from elephant's poo poo! N he actually DID it. He took one giant dung, squeeze it, and DRINK the fecal liquid that came from the poo. EUWW.
When you lost in the jungle and starving, don't worry cos you can always eat from any larva or creepy insects that scattered all around the jungle. or even a scorpion. or snakes. or honey straight from the beehive. And when you thirsty, you can drink your own urine or save it in a rattlesnake skin for the next drinking session.

It's not all about eating baby. He also loved to fly.. and jump.. and run.. and climb. Parachuting from helicopters or balloons, or paragliding crossing the Mt Everest.. Jump in a free waterfalls. And this one is crazy: he run before the train in the tunnel. His most creative idea was when he utilizing the corpse of a sheep as a sleeping bag and flotation device. Climbing is not a new thing for him, as he became the youngest British who climbed the Mt Everest (at age 23).
Speechless? You haven't seen anything yet. 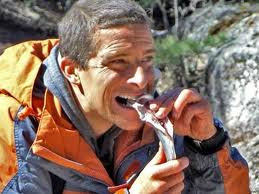