First of all, I begin with the movie I'm dying to see... James Bond : Quantum of Solace. 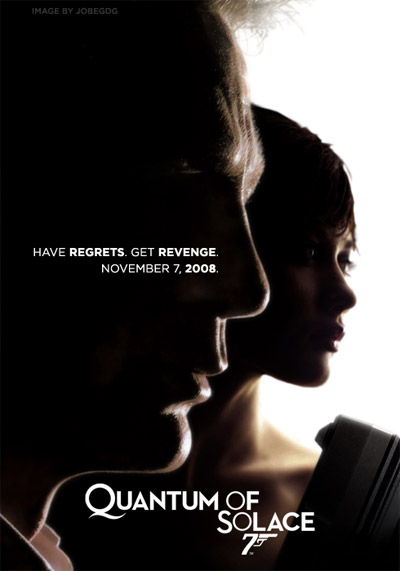 I went to see this with my boyfriend, thinking that it would be the same amazing picture that was Casino Royale. Sadly, it wasn't. Quantum of Solace still has the action, the girl and the explosions that you'd expect, but it is still missing something. By removing the gadgets, the car (only around for the first 5 minutes) and the improvisation that you'd expect a Bond flick to have, it has removed essentially what is a Bond film and what you are left with is the story. And the story was not that thought out. Many moments left me thinking: "what was the point of that?". The film is a lot darker, focusing mainly on the character seeking "revenge" but was not the film I expected it to be. A good watch, better than anything else at the cinema now, but not as good a film as I thought, and I felt a bit disappointed walking out. At most 7/10.

Meanwhile, congratulations for the recent election of Barack Obama as new President of US!! I was surprised that he used to live in Indonesia for almost four years and he has Indonesian blood on him :) I hope he can make differences to our country. Go Barrack! This guy made the history to be the first African - American who conquer the US.

“There are not even words to talk about what this night means. Everybody keeps using the word historic — there’s never been a night like this on the planet earth… Nothing can compare to this.”